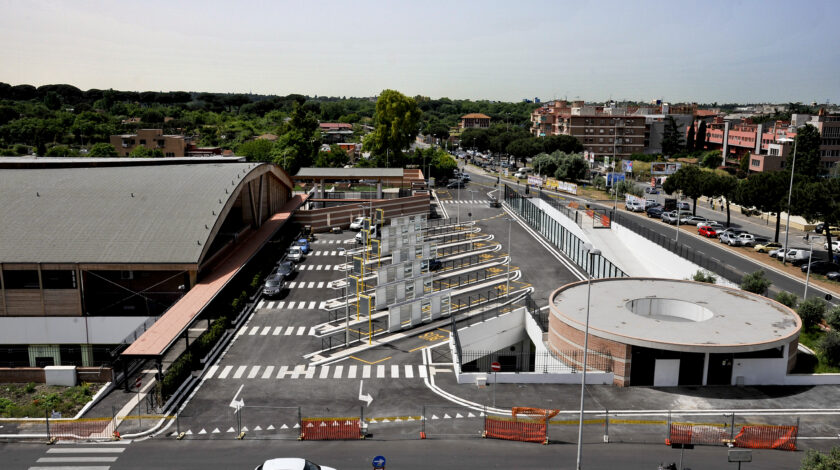 The building, intended for parking use, has plan dimensions about 61 m and 104 m; it has, in an eccentric position in the direction of its longest side, a constructive element of conspicuous stiffness that will be realized in RC cast in site and will contain the stairs and an elevator. Moreover, the part of the third deck, that will remain uncovered (ATAC terminus square), will be built with a different precast structure both from the remaining part of the third and from other two underlying decks.

These circumstances justified the opportunity to insert a structural joint to separate the precast building in two parts. The joint will be realized without doubling the pillars, but by adopting differentiated support devices, that allow the essential horizontal displacements: the three decks will have instead a discontinuity parallel to their direction in correspondence with the support devices.

Also the other factory corps, built on site, will be joined to the precast one of the real parking.

The structure of the square’s roof will be made of lamellar wood arches, a secondary frame, a minimal frame and roof panels also in laminar wood, with overhead appropriate cladding for the protection from the atmospheric agents. The particular roof structural conformation will need a series of steel chains, which must be laced on the extrados of the third deck, before the arches assembly, as well as an appropriate bracing system.

The underground volume has a series of RC piling walls to resist the lateral soil pressure; in according to the architectural project’s requirements, the piling walls will produce two different aspect of the terrain downhill.

On the parking side towards Via dell’arco di Travertino, on a part of subway side and at the two spiral stairs, the dig bottom will be horizontal at the various planned excavation’s depths; on the remaining part on the side towards subway and on the other two sides, the terrain downhill will be arranged in a suitable slope
with the green surface layout provided by the architectural project.